Ibiza is an island located in the Mediterranean Sea, which is next to Mallorca, Menorca and Formentera and several smaller islands of the archipelago and autonomous community of the Balearic Islands in Spain.

Ibiza mapaSituada east of Spain, Ibiza has an area of 572 square kilometers and a population of 140,964 inhabitants according to data provided by the National Institute of Statistics in 2015. All this makes this i 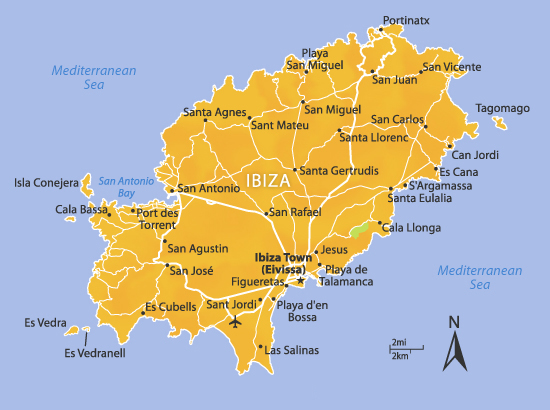 sland in the second island of the Balearic Islands in terms of population after its neighbor Mallorca.

Its length is 210 km coastline, where more than 40 rocks and islets of various sizes alternate. With a maximum distance of 41 kilometers from north to south and 15 kilometers from east to west, the island is certainly a great challenge for those adventurers. And, with a very irregular morphology formed by several mountains, beaches Ibiza not only offers its tourists but also some mountain area between highlighting Sa Talaia, the municipality San Jose with 475 meters.

Ibiza fame extends not just for Spain and Europe but goes much further. And, we speak no doubt one of the biggest tourist destinations in the world thanks to its beautiful coves, beaches and water quality. In addition, it is recalled that Dalt Vila, the historic center of the city of Ibiza, is since 1999 Unesco World Heritage. Not to mention attractions for any newcomer as the natural park of Ses Salines, the Necropolis and the Museum of Puig des Molins, the Punic-Roman settlement of Ses Paisses of Cala D’Hort, the Cathedral of Santa Maria, the Castillo de Dalt Vila or the Phoenician archaeological site in Sa Caleta and others.

However, the island also offers many more things like superb cuisine for the finest gourmets. Not to mention the holidays, another major attraction for many tourists who want to visit and dance in the most famous clubs in the world as Pacha, Privilege Ibiza, Space, Amnesia …